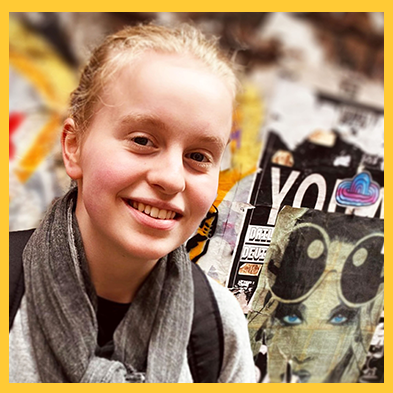 ‘Definitely surreal! And a bit scary knowing 30 other students and teachers are watching something that you’ve spent most of a year making.’

These were the thoughts of Year 12 student, Angie, when she recently presented her short film up on the big screen with the Year 12 Graduate Media films at the Thornbury Picture House.

Angie’s short film, Skala, is about her aunt who grew up in a rural town in Greece and experienced an earthquake as a child. The film is based on an article her aunt wrote about her experiences for a local Greek newspaper. To make it true-to-life, Angie’s aunt narrates the film in Greek with English subtitles.

‘As a student with autism, I’m a perfectionist. I wanted to make a movie that did justice to my aunt’s vivid story and amplify the terror she experienced,’ explained Angie.

‘There were times when I worried that the film wouldn’t do the story justice. On the days when things didn’t go to plan – like an actor dropping out of a scene or discovering that a type of shot was not possible – my parents supported me and would remind me that it’s not the end of the world if something doesn’t go according to plan. Every problem has a solution.’

‘Autism isn’t a challenge – it’s a superpower – it enables our creativity to shine.’

Melinda said that Angie’s superpower is something that VSV has actively nurtured.

Highlighting her perfectionist traits, Angie’s film, which had to be less than 10 minutes, clocked in at 9 minutes and 59 seconds.

‘I like to make the most of my film time,’ enthused Angie.

Special thanks to the Thornbury Picture House for giving VSV and its students the red-carpet treatment!