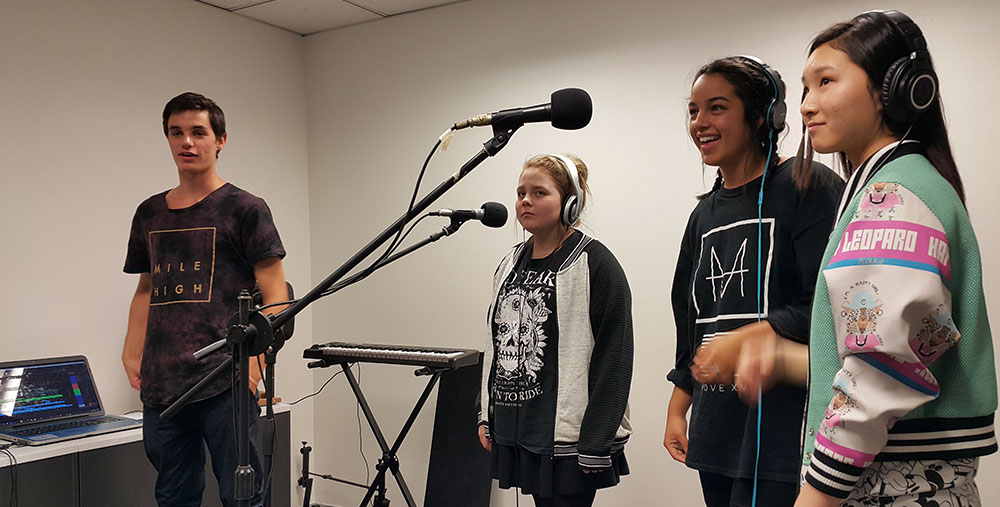 NZ - Echoes of the Sun, collaboration and creativity online

An online collaboration between Te Kura students has been recognised in a New Zealand competition. This successful project was also described in Jan Bolton’s citation when she received a Teaching Excellence Award from AADES.

The song Echoes of the Sun is the result of a collaboration by many Te Kura students. The song won the music section of the Create1World Creative Activism competition in both Wellington and Auckland. This conference for high school students has a range of competition categories across the arts.

Cassie Henderson, a Create1 World Wellington competition judge and X factor finalist said in her comments on Echoes of the Sun, “This one really caught my attention. The song is not only a powerful and relevant message but its construction and melody also sound like something that belongs on the radio today, however, in saying that the song still holds very unique and original sounds…you should all be extremely proud of this awesome song. I loved it from the beginning. Congratulations and all the best for the future.”

Echoes of the Sun has involved a wide range of students contributing in a variety of ways.  Te Kura student Bayley Milne says he got involved in the project because, “My goal in my music career is to produce and write music that is a counter to the negative messages that today's music sends out, and I believe Echoes of the Sun does just that, so I enjoyed being part of it.”

The project included 56 students involved in the song development; writing lyrics, the composition of music that’s both electronic and instrumental, and instrumental and vocal performances.  This song was also recorded and mastered by students. Another stage of the project was the production of a music video that again represents the contribution and talents of many students and continues themes from the song, such as the celebration of diversity.

The song was developed in discussions between students in Te Kura’s Online Teaching and Learning Environment (OTLE).  Te Kura’s Kaihautū Mātauranga for the Arts Jan Bolton explains, “Google Docs was used to write the lyrics, so students could contribute, edit or make comments on the lyrics online in real time. Students also collaborated online to compose the music.”

Bayley was one of the lead students on this project. He’s been playing piano and drums from the age of 9 and started writing and producing music when I was 13.  Now in year 13 he aims to study music next year, most likely at Auckland University. Bayley had a central role in taking everyone's ideas and putting them all together, adding what needed to be added and then mixing and mastering everything. Bayley and his father Doug set up a recording studio at Te Kura’s Auckland office to record vocals and some of the instrumentals.

Among many other talented students, Seth Austin provided a seminal guitar track for the song, and Matthew Beardsworth - another great talent in music- also contributed orchestration sections. Renee Plumpton, Taylor Taraare, and Ada Wong are lead vocalists and joined the Auckland recording sessions.

A number of Te Kura staff encouraged student participation at different stages of the project, including being present at the Create1World Finals (in Auckland Hayley Yoon and Robert Blucher and in Wellington Joan Aitken and Jan Bolton).

Jan says that with this collaborative project she was keen to challenge some of the perceptions around distance education and show what is possible, she says, “The end result is something that could never have been achieved by just one or two people alone, and which reflects the unique character of Te Kura and its students”.

However, Jan says it’s really all about the work of the students. “They have had a strong unified drive and vision- this is such deep and rich learning, and it’s making the best of student talents. It’s been really inspiring and enjoyable for Te Kura staff to watch this unfold.”

Jan says a key part of these projects is that they are in the hands of the learners and by teachers having high expectations, mentoring and facilitating, young people can have fun and learn deeply, picking up necessary qualifications along the way.

Te Kura Chief Executive Mike Hollings says, “This project illustrates the way Te Kura is now working more and more. Every school in New Zealand and, in fact, around the world is grappling with the challenge of connecting with students, engaging them in learning, making it authentic and relevant. We also need to make sure our young people are skilled in the use of technology and there is no better way of doing that than making it an integral part of their learning.”

Jan Bolton says that involvement in Create1World has allowed our students to continue to be proud of their effort, and the students who attended said they appreciated the chance to think further about opportunities.  Jan says the prize money rewarded to the school can go towards another collaborative project.

You can listen to the song and watch the video below and on Te Kura’s Facebook page www.facebook.com/tekuranz